When we survey military spouses, who are we really studying?

I was reminded by this distinction between category and identity recently at a dinner function. I went to dinner with a group of fellow military spouses whom I met through a military spouse non-profit organization. Here I was, sitting at a table of people I only sort of knew saying goodbye to a spouse who was moving. Sitting around the table were lawyers, coaches, teachers, artists, and mothers who all, including myself, proudly and fiercely wear the title of “military spouse.” As I left I thought to myself—all of us get something out of identifying as a military spouse, what is it? And why? Then I thought of other friends, those who are technically “military spouses” because they are married to someone in the military but whom would never identify as such. These friends would never (underscore never) attend a military event, family readiness group, or utter the words “I’m a military spouse.” For those individuals, the identity of military spouse is immaterial. There’s nothing of benefit or value for them in being a military spouse. 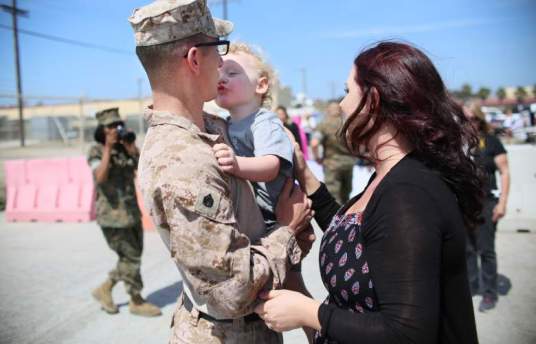 The intersection of my personal experience as a military spouse and sociological imagination has reminded me of the deeply ingrained layers of identity salience in the military spouse community; layers that fundamentally impact who responds to the military spouse moniker, and as a consequence, who ultimately ends up in our surveys. Conceptually, I’ve outlined the three progressive layers I’ve come to know during my time married to someone in the military:

At the center of the military spouse community are those who readily identify and associate themselves as a military spouse. They participate in the community (to varying degrees), engage with related non-profits or veteran service organizations, and would bring up the fact that they are a military spouse at a relevant point in conversation. Everyone at that dinner table that night, including myself, is part of this group. In my experience, these spouses tend to have been military spouses for longer or have a servicemember who is planning to stay in for a career, adopting this identity because of the extended commitment the servicemember has made. In the public eye, these are the spouses who are the most present and available advocating for military family issues.

The problem with much of our survey research is that when military spouses are surveyed, it is the core spouses who recruited and core spouses who tend to respond. This is true of both surveys with meticulous sampling designs and those that use convenience and snowball sampling.

The best example of this is the disproportionate number of senior enlisted and officer spouses who respond to surveys compared with spouses of junior enlisted servicemembers. We know that in the military, the manpower structure is governed by a small group of officers (17 percent of the total force) and a large base of enlisted personnel (82 percent of the total force). Among the enlisted force, half of the personnel (50 percent) rank between E3 and E5. The majority of the military force is married, 50 percent of enlisted personnel are married and almost 70 percent of officers are married in the active-duty population (2016 Profile of Military Community Report).

RAND’s final 2016 report on the Deployment Life Study (a longitudinal data collection effort) reveals how even with stratified random sampling and sophisticated analytic weights, response to the survey was likely influenced by the salience of the respondent’s military spouse identity. In the initial 2014 report about the baseline sample response, they acknowledge the high presence of experienced servicemembers and their spouses in the sample, saying: “The servicemembers in the baseline sample were experienced soldiers, airmen, sailors, and marines. On average, servicemembers had served in the military for almost ten years and had experienced almost three relocations (or PCSs) of 50 miles or more since 2004.” From the initial sample, servicemembers and spouses E-4 to E-9 made up greater than 70 percent of the sample while E1-E3 servicemembers and spouses were closer to hovering around 5 percent of the sample, which is an overrepresentation of mid- and senior level enlisted and an underrepresentation of lower enlisted servicemembers and spouses. In the final 2016 report, the authors also acknowledged a “disproportionately high number” of officers enrolled, especially junior officers (O1-O3).

In a survey like RAND’s this disproportionate response rate is less concerning given the stratified sampling approach and extensive use of analytic weights to ensure the data is as representative as possible. Where this problem more significant is with non-profit and service organization surveys that employ convenience sampling methods with no weighted data analysis efforts. Blue Star Families (BSF) annual Military Lifestyle Survey is one of the most recognized service organization surveys about military spouses and military families. It is used by the media and even members of Congress to advocate for current issues military families are facing. The survey isn’t limited to spouses or servicemembers, it is also open to veterans (and spouses of veterans), parents, children, sibling, and significant others. This diverse range of military affiliation allowed for respondents is a common feature among service organization surveys (see also, the Military Family Advisory Network survey and Military Officers of America survey; for ve). In the 2017 BSF survey, junior enlisted are again severely underrepresented while mid to senior enlisted personnel and their families are overrepresented compared to the 2016 active-duty population (using for basic comparisons, cannot be an exact comparison due to sampling differences).  With officers, the representation becomes even more severe. Upper-level officers, those who are O-4 to O-6 and General Grade Officers are significantly overrepresented in the BSF sample. While their report acknowledges a “greater number of older and more senior ranking respondents in the sample”, this contextual information tends to get left off in third-party discussions of the results. The skewed representation present in BSF and other community-led surveys creates results that overrepresent spouses with a more substantial commitment to the military spouse identity.

Beyond who responds to the survey, survey recruitment and fielding is also problematic for our data on military spouses. This is especially an issue in surveys conducted without the assistance of Department of Defense databases like those conducted by organizations. Non-profit and organization based surveys typically recruit participants entirely through social media and word-of-mouth. For example, survey recruitment for the BSF survey (survey is entirely online) typically occurs over the course of 1.5 months. They use “direct-email distribution from BSF and Institute for Veteran and Military Families (IVMF) mailing lists and social media dissemination.” In addition they rely on “outreach from a myriad of diverse military family, military, and veteran service nonprofits, supportive service organizations, and professional organizations.” The communal word-of-mouth recruitment style of these surveys is reaching military spouses who are already connected with these resources and those who in some form recognize or acknowledge their military spouse identity. Therefore sampling on convenience equates to sampling on military spouse identity, drawing in a substantial number of “core” military spouses.

And so while we have some data on military spouses, we truly do not know them. A select few of our existing data weighs and carefully measures sample representativeness, other information is used as-is without enough contextualization of the data and the results. It is possible that core military spouses have many of the same characteristics and issues as all dependents/people married to someone in the military/military spouses, but it is also just as likely that they are very different. We won’t know until we have identified better ways to collect data representing the entire community of military spouses.