From my own research analyzing major media attention to veterans, a similar pattern emerges if we look at newspaper stories, not google searches. In fact, when we collected news stories mentioning veterans to systematically analyze their portrayal of veterans, we had to exclude “Veterans Day” stories because they were so different from the usual news reporting on veterans during the other 364 days of the year.

So what about those other 364 days of the year? What does the media talk about when it reports on veterans? You can read our full study results in the paper, “Coverage of Veterans of the Wars in Iraq and Afghanistan in the U.S. Media.” in Sociological Forum Vol. 30, No. 2, June 2015.

We identified over 600 articles in the New York Times and Washington Post about US veterans of the wars in Iraq and Afghanistan. Not everyone reads these papers regularly, but they set the reporting agenda for other news outlets, elites who influence policy tend to read these papers, and with the rise of social media, stories are shared electronically through Facebook and Twitter, reaching  audiences beyond traditional subscribers. 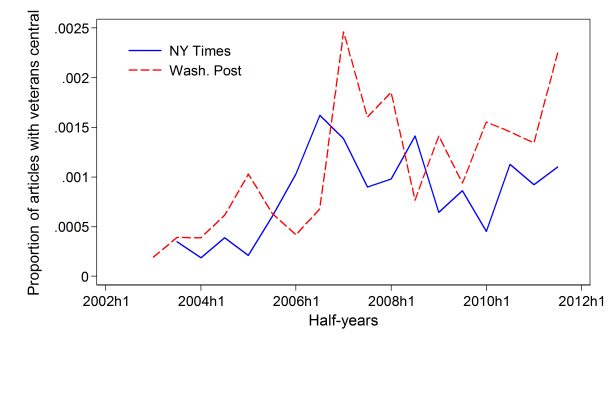 Based on our in-depth coding and analysis of 151 randomly selected articles from this set of more than 600, we found that media portrayals of veterans often show them as damaged or harmed by their military service, but as deserving of government benefits and social support. 87% of the articles we coded referenced veterans’ victimization by injury at war, or at home by the institutions meant to serve them.  Two-thirds of the articles we coded mentioned a physical injury, while 15% referenced a mental health problem. 68% of our sample of articles explicitly stated or implied that veterans were deserving of something more than they were receiving, and often as deserving more than non-veterans as a result of their military service.

These two themes of victimization and deservingness are related. Veterans are characterized as deserving of generous benefits precisely because of their injuries, sacrifices and suffering. Among articles that included victimization narratives, we found reference to deservingness made within 1 paragraph of the mention of victimization in 75% of those articles. In half of the articles that reference veterans’ deservingness, there is an explicit justification of it based on the sacrifices made by veterans, whereas the other half gave no explicit justification for why veterans deserve more than they are getting.

Veterans themselves, or organizations representing veterans, most frequently
mentioned veterans’ deservingness of more or better benefits and did so on the basis of victimization, often stated in the form of physical or mental “sacrifice” experienced by the veteran (59%). Other non-veteran organizations followed a similar pattern, with 70% of the mentions justified by victimization. Although some veterans’ advocates have questioned how media coverage of veterans’ mental health problems may lead to generalized stigma, veterans and veteran-serving organizations appear to themselves deploy victimization as a rationale for improved benefits. These groups
may recognize that media coverage of the victimization of veterans can be a catalyst
for social change leading to greater benefits and better treatment for the problems
facing veterans.

The emphasis on veterans as victims of war trauma, or even VA mistreatment by veteran advocacy organizations may facilitate and perpetuate their status as a highly deserving group, for whom government policy solutions are preferred. In fact, veterans and other organizations frequently invoke narratives of victimization and sacrifice to raise attention to the needs of the group. Yet, this attention to veterans’ problems is simultaneously feared by some in the veteran community to generate harmful stereotypes and social stigma. Our analysis suggests the attention to veterans’ victimization is tightly coupled with their framing as deserving of social and governmental assistance.

If veterans actively resist being cast as victims, they may also lose a key means of eliciting public support for ongoing or even increased spending on health care, pensions, and investments in programs like the GI Bill. However, cultivating a stronger narrative of post-traumatic growth may be a way to acknowledge the negative experiences of many veterans, while also resisting the negative connotations of the victim image. These are difficult balances to reach when trying to raise awareness of the challenges of veterans among the masses, while also not leading the public to negatively stereotype veterans.